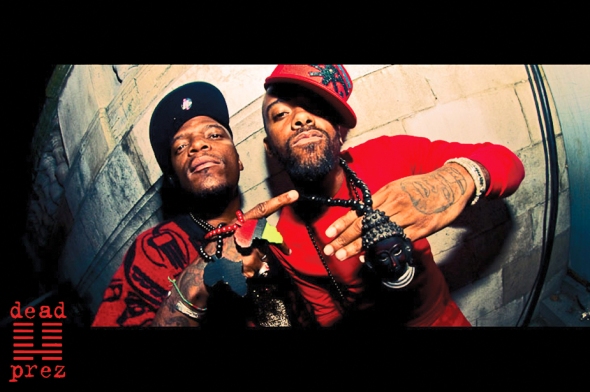 dead prez  is  M-1 (left) and stic (right).  Revolutionary Hip Hop with a Gangsta Lean. From their debut classic album Let’s Get Free, to their Turn Off the Radio mixtape series, all the way forward to M1’s forthcoming international project AP2P and  stic.man’s current ground breaking “fit hop” album The Workout, dead prez’s  RBG movement continues to evolve and represent Hip Hop culture authentically in this Age of Information.

Never ones to rush their process, dead prez has reemerged from the training, the touring and the activism to release a new studio album. If you’ve been out the loop on what’s happening with DPZ, you’ve come to the right place.

deadprez.com is where you can catch up on what you may have been missing and stay tuned for the new that is to come. This is where you’ll get the official word. Here you can contact dead prez to break bread or to build bridges or for bars and beats. Lots of exciting things on the way.

With hard-hitting beats, politically aware rhymes, deft lyricism and strong song concepts, dead prez emerged in 2000 as one of rap’s most politically strident outfits. Stic.man and M-1’s music provided a voice for the voiceless, a sobering look at the global power structure that was crippling billions of people internationally and millions of Americans domestically. The duo’s first two studio albums, 2000’s Lets Get Free and 2004’s RBG: Revolutionary But Gangsta, were accompanied by four acclaimed Turn Off The Radio mixtapes and solo albums.

When the duo embarked upon recording its third studio project, they wanted to present a new outlook. “We had already built on the political struggle on the first record,” Stic says. “We had already built on the streets and how that relates on our second record, so we said, ‘What about the inner liberation? What about the consciousness in terms of our perspective and our paradigms and our inner awakening? How does that relate to freedom?’”
That self-examination led to Information Age, dead prez’s first studio album in eight years. Stic and M-1 wondered if, during an age where information is easier to access than ever thanks to the Internet, people were taking advantage of that access. Were people tapping into their inner Google, so to speak? They wanted to present an aural juxtaposition of the technical age while using the ancient know-thyself-discovery process and deliver an album with a new, different timbre than their first two albums.
The sonics arrived in a futuristic form from producers Stic, Dirk Pate and others, complete with plenty of thump on the low end and ethereal elements. It was part of the progression, the next chapter in dead prez’s story. After all, there is no revolution without evolution.
“When you talk about growing, expanding and awakening, it allows you to open up like a lotus to all the things that are here in the world,” M-1 says. “We intended to be perceived as artists who change, who are adapting, who are strategizing.”
True, the duo’s pointed societal unmasking appears on the urgent “A New Beginning” and the biting “Dirty White Girl,” but Information Age also represents a shift, a move toward being proactive. It’s about an awakening, coming into knowledge and discovering things that are practical, useful and new.
“What If The Lights Go Out,” for instance, was partially borne from Hurricane Katrina and its aftermath. “Our comment in that song is about being prepared, being prepared for a natural disaster, for things that are going on in this world with war, terrorism, police brutality, storms, global warming,” Stic says. “Don’t just sit around and worry about what the government’s going to do or not do and just protest, but have a proactive stance. We need to move from a protest mentality to a proactive mentality.”
The proactive stance was influenced by, among other things, Jeet Kune Do. A martial art form that Bruce Lee helped create, it led to the song “No Way As The Way.” The discipline’s foundation is having no limitation as limitation, to take what is useful and discard what is not useful. It presented an approach contrary to what Stic and M-1 had experienced in various religions and social dogmas, ones that tended to be more rigid than fluid.
“If I had been in a box, I couldn’t have understood the different schools of thought I’ve been exposed to,” Stic says. “In the song, I wanted to show what I appreciated in each group, the same way that with Bruce Lee we learned to appreciate elements of Western boxing. We appreciated different Martial Arts because we’re not stuck in that rigid style of rules where it’s got to be one way.”
This perspective allowed dead prez to look forward to the future they desired, for the world for themselves and their families, as evidenced on “Learning Growing Changing,” “Time Travel” and “Take Me To The Future.” “We have to be able to imagine where we want to go,” Stic says. “People want revolution, change, hope. But then you ask them to define it and it’s all over the place. We’re back at war. ‘Take Me To The Future’ was about visualizing what you want.’ If you can see it, we can get there. Let’s envision a future that’s better for the human race, for the planet.”
Since its groundbreaking debut album, 2000’s Lets Get Free, dead prez has used music as a platform to rail against societal injustice. Individually and collectively, Stic and M-1 have been involved in political and community activism, pushing for progressive education for all people, teaching the merits of fitness and eating healthily and illustrating changes needed in American society and throughout the world.
The group were branded and viewed themselves as revolutionary. But unlike others with the label, dead prez seek change for the better in themselves, the status quo and those who challenge the status quo. Even though music was moving away from dead prez’s brand of edutainment at the turn of the century, Stic and M-1 provided a valuable service.
“We are one of the people’s voices,” M-1 says. “We are a product of a community with high expectations and revolutionary aspirations who have been able to bear the brunt of an industry that does not want or does not need for this particular phenomenon to exist – the phenomenon of the people’s voice. We are the voice of self-reflection in hip-hop, the challenge of growth and development in hip-hop. We have gladly taken on that responsibility.”
Although it has been eight years since RBG: Revolutionary But Gangsta, dead prez remained active with a string of solo albums, mixtapes and outside production with Nas, Erykah Badu and others. Both Stic and M-1 also wrote and are writing books and are in-demand speakers.
The time between albums may seem unusually long, but the group found many benefits during its hiatus.
“We needed that time to be able to genuinely express what we wanted in an album that’s talking about your own self-awakening,” Stic.man says. “I actually have to find my own self-awakening to speak on it with any amount of authenticity. We always set the bar ahead of where we are when we start a project so we use our creative energy to bring us forward as human beings.”
And with Information Age, dead prez continues pushing music – and humanity – forward.